This is perhaps the last book I’ll get to read (quickly) for pleasure until my summer class ends.  Oh, I’ll pick one out to read, but with teaching requirements now encroaching on my free time, I won’t be able to rip through them as quickly as I’ve been doing since mid-May. 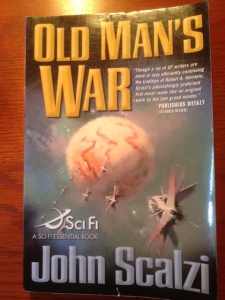 If you’ve never read Robert A. Heinlein’s classic (of both science fiction and critique of communism) Starship Troopers, you might want to hold off on that.  Scalzi’s Old Man’s War is – and it pains me to say this – a better version of that story.

Well, perhaps “better” is a loaded word.  It’s not exactly the same story, but it’s pretty damn close.  The differences aren’t all that significant – except for one.

Heinlein is clearly preaching in Starship Troopers.  Scalzi doesn’t presume to do so.

The similarities are numerous, though.  In both books men and women fight side by side as absolute equals.  There are boot camp sequences.  The warriors have super-human capabilities (in OMW, through genetic engineering; in ST, through their jumpsuits).  They face vicious alien bug enemies (though OMW features some non-bug enemies as well).  Both stories feature dropships and military camaraderie – you could layer Scalzi’s description of why the Colonial Defense Force (CDF) troops don’t immediately accept replacements over Heinlein’s description of why the Mobile Infantry (MI) troops don’t immediately accept replacements and practically be reading the same book.  I take that as homage rather than ripoff, though, because I really dig both books.

Scalzi also wrote one of my favorite – and I mean all-time favorite – sci-fi books, Redshirts. Absolutely great book.  It’s because of that book I wanted to read something else he wrote, to see if he’s really that good (spoiler alert: HE IS).  I’m not a big fan of series, though, so I picked up this stand-alone book (which, apparently, he wrote a sequel to, but I didn’t know that when I got this).

The premise of Old Man’s War is pretty simple.  Humans are expanding throughout the universe, colonizing as they go.  They must protect themselves from any number of hostile races they have suddenly found themselves competing against for territory, from the vaguely birdlike Rraey to the very scary beetle-like Corsu.  To effect this protection, Earth’s senior citizens sign up to leave the planet at age 75 and venture forever off world to fight – and die – for the colonists.

The gimmick, though, is that when you sign up, you get a fresh, new body to do the fighting in… and it’s glorious.  You’re young again.  When you finish your term of service (up to 10 years), you’ll get another new, but entirely human, body in which you’ll live out the rest of your (un)natural life, growing old again and dying in your due time.

The geriatric warriors reminded be a bit of the blue folks in that movie Avatar – even though Scalzi’s genetically-modified old-man (and -woman) warriors are green.

This book is both funny and poignant, lofty and disturbing, and even though it’s kind of a cliche, I have to say it’s a real page-turner.  I read it in one sitting, starting at 9 pm and not stopping until the wee hours (I think it may have been 1 am).  Fantastic book.

The science aspects of science-fiction are present here, which I dearly love.  Skip drives, alternate universes (or are they?), tachyon fields, and even some math.  Ray guns, space ships, and all that, but the plot pivots on a weird cross between gladiator games and a soccer game-ending shootout.

One of the themes of the book is the human reliance on technology; I’m not entirely sure if Scalzi thinks it’s a negative, but he certainly paints the picture of what can happen when we rely to heavily on technology without understanding how (and why) it does what it does.

There’s lots of violence (with some gory wound descriptions) and plenty of sex (though none too graphic) that would push this book into older teen territory.  Younger readers might not understand the dilemma faced by the main character, John Perry, as he realizes his role in the universe, but it’s far more lightly developed than in Heinlein’s Starship Troopers and that, I think, makes this book a lot more fun to read. Not as thought provoking, certainly, but a lot more fun.

(now I’m all caught up on my book reviews – three in one day…ooof!)

Please leave a comment - but also please remember that this blog is read by people of all ages. Thanks! Cancel reply

This site uses Akismet to reduce spam. Learn how your comment data is processed.